About the Dumpster Divers

The Philadelphia Dumpster Divers are a group of Artists, Collectors and others that are passionate about keeping things out of the trash stream.

A selection of Dumpster Diver Videos

Workshops given by dumpster Divers

Other doings of the members of the Philadelphia Dumpster Divers 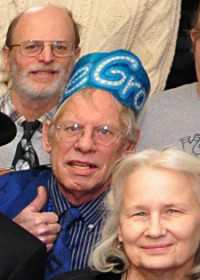 We regret to announce that beloved Dumpster Divers member, Randy Dalton passed away on February 5th, following a stroke.

He was a tireless champion of Philly artists, actively encouraging them to work together to Do Blue, rather than be blue about the obstacles and limitations they encountered.

Randy best exemplified this enthusiasm as an Artist in Residence at the Philadelphia Community Education Center. Here he created the Blue Grotto, a constantly morphing installation of blue lights and objects, many of which were displayed throughout the region, that showcased his mission to both be creative and inspire creativity in others.

As a fitting tribute, the Blue Grotto will remain open and continue to be a source of creative inspiration, thanks to the support of the CEC.

Here are the obituaries from the Philadelphia Inquirer, Philly.com and University City Review.

Randy & Dumpster Diver George Felice had countless discussions about The Fleetwood’s “Mr. Blue,” so George began working on a compilation CD, dedicated to Randy, of DooWop songs with “Blue” in the title. He managed to gather the songs but wasn’t able to give the collection to Randy before he passed.

George found versions of the songs on YouTube and we would like to share them with you, as a way to remember, honor and mourn our blue friend.”

On Sunday, April 1 through Saturday, April 7, 2012, the Dumpster Divers observed the 20th Anniversary of the founding of this pioneering group. 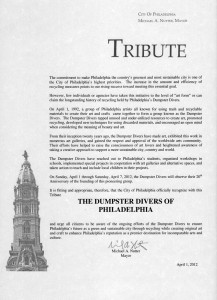 Mayor Nutter officially recognized the event with a Tribute: