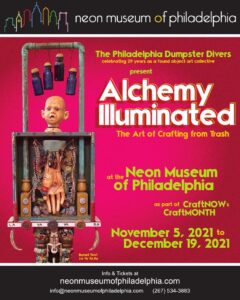 A a very special group show from Philadelphia’s Dumpster Diver art collective. Alchemy Illuminated is part of Philly’s annual CraftMONTH, in which CraftNOW showcases the city’s craft and making scene through a series of events surrounding the Philadelphia Museum of Art Contemporary Craft Show. Formed 29 years ago, the Philadelphia Dumpster Divers are a found object art collective. Join us for this exciting exhibit of assemblage at its finest, with artist appearances and events throughout the show.

Pop-up on Passyunk featuring windows filled with portraits of 26 longtime Divers 1548 E Passyunk (at Tasker), Philadelphia PA 19147
The window portraits will be up every day through October 28, and will be lit from 4 pm – 1:30 am. 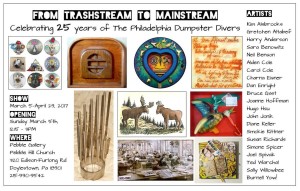 The Dumpster Divers were invited by the Philadelphia Office of Arts, Culture and the Creative Economy participate in Philly VOTE, a nonpartisan exhibit of works that encourage voting. These artworks were created by community arts organizations and schools throughout Philadelphia’s neighborhoods.

Featuring the work of Ellen Benson!

Special thanks to James Dupree for hosting and Eva Preston for currating the show.

Who are The Dumpster Divers of Philadelphia? They are a group of over 40 found object artists, meeting monthly to socialize with fellow art eccentrics, share trash-picked finds, art-making, stories, field trip and flea market news and exhibit announcements

This major group exhibition will show how found objects inspire artists to create figures, masks, political statements, abstract assemblages, still life, works of art contained in boxes, and art used for story-telling or function. Their artwork is as diverse as the group and as the materials used. All of it is engaging, often playful, sometimes political, ironic and definitely delightful.

Special thanks to Ann Keech for organizing this event.

For over 20 years, the Philadelphia Dumpster Divers – a group of about 40 Philadelphia-area based artists, collectors and friends – have been working with found objects and recycled materials to create extensive works and group efforts.

After years of neglect, the 4600 block of Paul Street in Frankford is beginning a new life. Destination Frankford is transforming a formerly vacant storefront into an energetic art venue. The temporary pop-up art gallery will accelerate the process of neighborhood revitalization in Frankford.
OPENING RECEPTION for RECLAIM & BLOCK PARTY
Saturday, April 19 | 2:00 – 5:00pm
@ the corner of Frankford Avenue and Paul Street
MFL to Margaret-Orthodox
Three separate exhibitions will each focus on one part of the theme:
RECLAIM | REDISCOVER | REANIMATE

RECLAIM will feature members of Philadelphia’s Dumpster Divers. Saturdays from April 19 to May 17, 2014, the Dumpster Divers will RECLAIM discarded materials and transform them into new art forms. Seventeen artists who see the possibilities in trash and other under-utilized resources will bring a new awareness to the concept of “upcycling “to Frankford.

Destination Frankford is an arts-based initiative using MARKETING and CREATIVE PLACEMAKING to enhance and expand the resources of the Frankford’s growing ARTS, ARTISANAL INDUSTRY, and CREATIVE BUSINESS economy.

View photographs of the exhibition.

Posted on January 5, 2013 by Common Consensus

Over 20 Dumpster Divers are exhibiting in this delightful and inspiring exhibit.

The Dumpster Divers Come to Ambler Popups
May – August 2012

Posted on November 28, 2010 by Common Consensus


Going Green: The Art Work of the Dumpster Divers Show at The Noyes Museum of Art
September 1 – 27, 2010

The Games We Played: Remade at the Burlington County Art Center
June 9 – July 8, 2009

Discussion with the Dumpster Divers to be held Second Sunday, May 10, 2009

Found Object Art, The Trashy Women and Dumpster Divas: A Little on the Trashy Side at the Cecil County Arts Center
March 27 – April 24, 2009

Sculpture from Styrofoam packing pieces created with visitors and Dumpster Diver artists in residence. Completed recycled Styrofoam sculpture maze on exhibit for the month of April.

What do you get when you take 25 selected Philadelphia Dumpster Divers, give each of them the same materials (25+ items) to work with and send them off for a few months to their respective creative lairs to create an artwork? And the only rule is that “There are no rules, only materials.”

Trash Transformation – Art Alchemy,” an exhibit by Philadelphia’s Dumpster Divers, offers a high-style alternative for America’s throw-away culture. It is a vision that includes artistic craft, innovation and garbage. Visitors should prepare to be amazed.

This art collective finds all its materials in one place: the garbage. But their beautiful creations are far from trashy–they’re a commentary on the wastefulness of our society.


Saving Philadelphia: The Art of the Dumpster Divers at the Sedgwick Cultural Center
January 16 – March 14, 2004

Philly’s Dumpster Divers have had a formidable ride since their 1992 inception. They’ve taken Dumpster Diving beyond the anarchist, sociopolitical rhetoric of radical nonconsumption into the pragmatic act of creation.